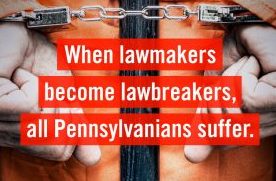 “For two straight years, Gov. Wolf and the General Assembly violated our state constitution’s balanced budget requirement by enacting unbalanced budgets,” Brouillette commented. “Even now, our current budget may soon be out of balance as Gov. Wolf restarted an old program that is not funded in the state budget, unilaterally adding spending that could amount to $150 million per year—again, with no way to pay for it.”

In 2016, Wolf and the General Assembly allowed an unbalanced budget to become law in violation of the state constitution (Article VIII, Section 13), the Administrative Code, and Gov. Wolf’s own Office of the Budget. Throughout the ensuing fiscal year, Wolf refused to freeze or reduce spending even as revenues continued to fall short of projections. Then, last year as the state faced a $1.5 billion budget shortfall, Wolf again allowed an unbalanced budget to become law.

Furthermore, in reaction to a recent legal decision, Gov. Wolf ordered the reinstatement of the state’s General Assistance Program, notwithstanding that the court gave no directive to restart the program. Wolf’s action could cost the state $150 million annually, even though his administration has admitted funding may not be available in the current budget to pay for the program.

In addition to Gov. Wolf and the General Assembly, the lawsuit names Auditor General Eugene DePasquale and Treasurer Joe Torsella as defendants for enabling deficit spending and unconstitutionally loaning monies to the General Fund.

In December, the Commonwealth Court rejected attempts by the governor, treasurer, auditor general, and Senators Jake Corman and Joe Scarnati to have the case dismissed. In her decision, Judge Renée Cohn Jubelirer wrote, “[T]here are sufficient legal and factual issues that remain in dispute, such that this Court cannot find Petitioners’ constitutional claims moot.”

The upcoming oral argument will center around additional preliminary objections filed in the case by Gov. Wolf, et al.