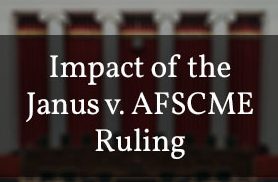 News Release:  June 27, 2018—Today’s historic Supreme Court ruling in Janus v. AFSCME, upholding Mark Janus’ right to choose whether to fund a government union, is a major win for worker freedom—and a major loss for Gov. Tom Wolf and his allies who rely on union coercion to help bankroll their elections and move their policy agenda.

In a 5-4 decision, the Court ruled that Janus, an Illinois child-support specialist who is not a union member, cannot be forced to pay the union a fee just to keep his job. In 22 states, including Pennsylvania, unions can force non-members to pay a “fee” to the union as a condition of employment. Unions claim these “fees” do not support political activity as they fund collective bargaining, but that is false.

“So-called ‘fair share’ fees have long funded union political activity, and thankfully the Court recognized that there is nothing fair about them and they are a clear violation of employees’ First Amendment rights,” commented Matthew Brouillette, president and CEO of Commonwealth Partners Chamber of Entrepreneurs and a former high school teacher. “If any other industry negotiated with the government for taxpayer-funded salaries, benefits, or pensions, there would be no question this is ultimately political activity.

“Yet in Pennsylvania, government unions have used forced fees from non-members to lobby in the state capitol for massive taxpayer-funded contracts that redirect Pennsylvanians’ tax dollars to union priorities. Gov. Wolf, who has agreed to union contracts worth billions of dollars, then demands working families pay for them through higher taxes.”

Government unions argue they’re forced to represent non-members but fail to mention the unions themselves ask for this requirement. In fact, the obligation to represent everyone in a bargaining unit goes into effect only when unions demand to be the “exclusive representative” of that bargaining unit. Simply seeking to represent only union members instead of nonmembers would mean unions could bargain only for those who want representation.

Additionally, because government unions can penalize workers for leaving the union by forcing them to continue paying the union a “fair-share fee” equal to about 75% of full union dues, public school teachers and state and local government workers are disincentivized from opting out of union membership.

For example, in recent years, government unions have used members’ dues to oppose liquor privatization, urge passage of Gov. Wolf’s tax increases, and endorse candidates for state and federal office. While fees are not supposed to fund these types of political activity, there is little accountability to ensure with accuracy that fees are not funding them.

“For public employees, this case is about freedom of association, but for Gov. Wolf and his allies, this case is about advancing their political agenda. For far too long, government unions have relied on coercion to populate their membership rosters, extract fees even from non-members, and use this money to advance their politics and elect candidates who will toe the union line.

“The Court’s decision today frees over 300,000 public employees across Pennsylvania—and millions across the country—from decades of government union compulsion. Unions can still collectively bargain, lobby, and fund political campaigns of their choosing, but for the first time in a generation, government unions will now have to prove their value to members on a free and even playing field.”