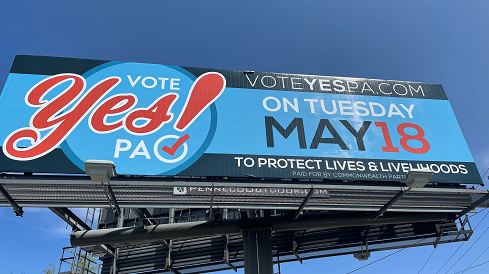 Op-Ed by Jon DeArment. The following commentary originally appeared in the Erie Times-News and has also appeared in multiple other media outlets in Pennsylvania.

Over this past year, Pennsylvanians have shown amazing resilience. Faced with a global pandemic—that quickly became very local as well—our families, friends, communities, and coworkers have adjusted, innovated, overcome, and, yes, grieved together.

While we see the proverbial light at the end of the tunnel, recovering from this past year will be neither quick nor painless. But equipped with a year of hindsight, we are better prepared to face the future.

Part of this future should include a guarantee that if we ever again face a similar emergency, we can act more swiftly to protect both lives and livelihoods.

A year ago in March, my company, Channellock®, closed its doors in response to Gov. Wolf’s order closing non-life-sustaining businesses. While all of us wanted to do our part to save lives, few things have been more difficult than furloughing my 358 employees. I didn’t know at the time when they would be able to return, but I fully recognized they had families to support and bills to pay, just like all Pennsylvanians.

Thankfully, we applied for and were granted a waiver to reopen from the Department of Community and Economic Development, and our closure turned out to be short-lived.

Unfortunately, not all businesses had the same success we did in navigating the often-confusing and opaque waiver process. Instead, many businesses were still deemed “non-life sustaining” despite the livelihoods they supported. And often there was no explanation for why one business was granted a waiver while a competitor in the same industry was not.

Indeed, the shutdowns and subsequent waiver process dealt a blow to thousands of Pennsylvanians, as no one’s business or livelihood should ever be considered non-essential.

As a result, thousands of families across our region faced lost jobs and wages. Compounding this concern were the difficulties they faced in reaching the state’s unemployment office.

Businesses and workers weren’t alone in having vastly different experiences this past year. Children also saw disparities in their schooling experiences.

While all schools initially closed, some reopened either partially or fully more quickly than others. Some remain closed. And while some children have thrived in new learning environments, sadly others have not. Meanwhile, parents have often faced frustrations adjusting to new education models.

And we can’t overlook the grief of the families who lost loved ones as well as families separated from loved ones for months due to restrictions on visiting nursing homes.

In all these areas of difficulty, hindsight provides a path forward.

On May 18, Pennsylvanians will have the opportunity to vote on three proposed changes to our state constitution. Two of these changes would help us better handle statewide emergencies in the future, and the third would prevent discrimination on the basis of race or ethnicity.

Pennsylvanians should vote “yes” on all three.

Specifically relating to how emergencies are handled, the amendments would allow a governor to act swiftly to protect Pennsylvanians in the face of an emergency while ensuring that the governor and legislature work together to protect lives and livelihoods during a long-term response to an emergency.

Practically speaking, this means the governor could make immediate decisions for the first 21 days of an emergency, and then our elected lawmakers would join with the governor in determining the state’s continued response.

All of us would likely say that Pennsylvania did many things right in responding to the COVID pandemic, while agreeing that there is always room for improvement.

The proposed constitutional amendments offer us the opportunity for that improvement. The good news is that all registered voters—regardless of party affiliation—are eligible to vote on these amendments.

A year ago, none of us could have imagined what lay ahead. We’ve weathered the initial storm and have the opportunity to recover in such a way that we’re even better prepared to face the future.

By learning from this past year, we can forge a path forward that will protect our local communities, including our children’s education and our small businesses.

I hope you will join me in voting yes on May 18.

Jon DeArment is President and CEO of CHANNELLOCK®, Member of the Board of Governors at the Manufacturer & Business Association, Vice President of the Board of Directors of the Hand Tools Institute, and Trustee of Commonwealth Partners Chamber of Entrepreneurs.